Regional diesel demand fell by 61 thousand b/d y/y, led by a 91 thousand b/d (20%) y/y drop in South Korean demand. Korean demand was marred by the end of the government’s tax cuts on auto fuels this summer, which prompted consumers to stock up in August. Demand is set to remain weak in the near term on rising retail fuel prices. The softer demand outlook is also expected to translate into higher exports for the rest of the year, especially as refineries return from turnarounds this month.

Refinery runs fell by 0.18 mb/d y/y to 6.78 mb/d in September due to lower margins. Crude imports fell by 77 thousand b/d y/y to 5.93 mb/d, as a 0.19 mb/d y/y increase in Korean imports failed to offset lower Japanese (-0.15 mb/d y/y) and Australian (-0.11 mb/d y/y) imports. Product exports rose by 48 thousand b/d y/y and are likely to increase further in Q4 19 on subdued domestic demand and higher refinery runs. Australian condensate production increased by 36 thousand b/d y/y in September to 0.21 mb/d. With refinery appetite for condensate rising across Asia, INPEX recently announced its intention to increase exports of Ichthys condensate in 2020 to 63 thousand b/d (from 52 thousand b/d in 2019). Total product stocks across OECD Asia rose by close to 2 mb m/m to 158.6 mb, as low oil demand and Typhoon Lekima meant refineries could not place volumes in the domestic market. Crude stocks fell by 6.8 mb m/m to 112.3 mb. 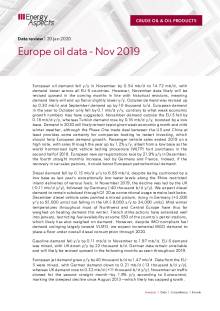 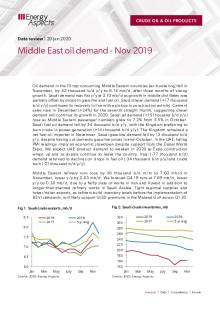 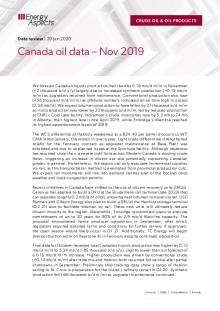 No cover
Within this report you will be able to review the latest figures published by Baker Hughes by oil..