While no single event trigger was apparent last week, the growing tide of bearish news finally pushed the market out of its latest range with EUA prices dropping some 9.3% w/w. A range of factors bubbling in the background have provided a bearish narrative for a while, including weakness in European industrial production data and softness in European gas markets. The latest PMIs show that EU, and in particular German, manufacturing output and confidence are low, pointing to a high risk of economic recession. Actual EU industrial production (IP) readings remain weak, with the industrial sector likely to provide an 10 Mt y/y reduction in emissions over 2019. The European gas market prompt remains priced at levels around where almost all the coal-to-gas fuel switch is likely to be realised. This points to a significant y/y emissions reduction of 41 Mt from the power sector in 2019. On top of this, the optimism that may have come from last week’s ambitious legislative platform set out by European Commission President-elect Ursula von der Leyen was dented. Polish Prime Minister Mateusz Morawiecki effectively argued that the country could not abandon coal mining and coal-fired power generation. Subsequent reports suggested that von der Leyen’s first 100-day legislative programme would likely focus on the 2050 carbon neutrality target, leaving 2030 adjustments to later. UK Prime Minister Boris Johnson presented a revised exit agreement to the EU, which was at best taken by European leaders as a starting point for further negotiations. The odds of a no-deal Brexit dropped on the news, to an implied probability of just 15%. If anything, that easing of no-deal Brexit risk should have supported EUA prices. Finally, the market was technically bearish after prices dropped past a key technical support level at 23.70 €/t to close Friday at 22.40 €/t. The carbon market certainly still had a mix of longs and shorts. The open interest (OI) in call options still accounts for 58% of option OI on ICE, but many longs in futures would have been stopped out, accelerating the downward trend. The technicals are likely to be in the driving seat, but after such a big drop the market could be reluctant to go any lower in the coming week. 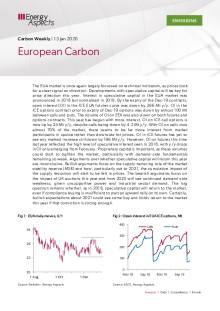 The EUA market is once again largely focussed on technical indicators, as prices look for a clear.. 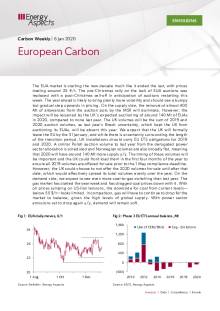 The EUA market is starting the new decade much like it ended the last, with prices trading around.. 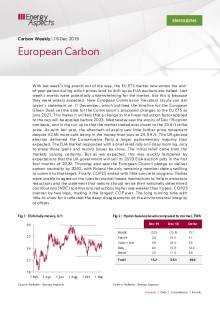 This will be the last weekly carbon report for 2019. The next update will be published on Monday.. 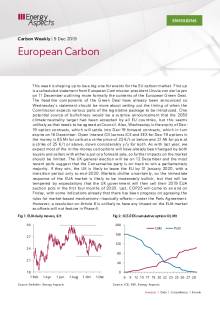 This week is shaping up to be a big one for events for the EU carbon market. First up is a schedu.. 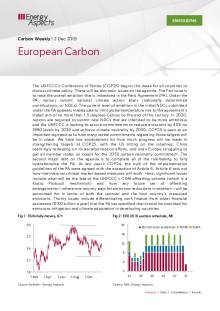 The UNFCCC’s Conference of Parties (COP25) begins this week for all countries to discuss climate..