The attack on Saudi Arabia’s Abqaiq oil processing facility has brought geopolitical risk to the global products markets. Saudi officials were quick to whisper soothing words to the market, but there is a lot of positive spin being put out. The Kingdom has always prided itself on being a reliable energy supplier and has attempted everything to avoid declaring force majeure on its crude exports, relying instead on stock draws and refinery run cuts. Similar efforts are being made for products, but refineries sit lower down on the list of priorities than crude exports.

Saudi officials claimed that about 2.5 mb/d of crude production was restored quickly and that ‘most’ production will be back by end-September, though this may be all they are willing to say publicly. Juggling planned turnarounds and drawing down crude stocks could keep diesel exports at levels that might be deemed ‘normal’ during refinery maintenance through October, though some buyers have already been told to expect delays and Saudi Aramco has been looking to buy cargoes extensively, suggesting all is not well in the restart effort. Even under the most optimistic scenarios, planned work and modest run cuts means Saudi diesel exports are likely to be some 0.3 Mt lower than normal volumes in October, reducing Q4 19 stocksbuilds.

One mitigating factor is the fading outlook for MGO. Last year, MGO was seen as the consensus winner of IMO 2020. We have argued for some time that VLSFO will be the long-term solution to IMO 2020, but that it would be limited in the short run by the reluctance of ship owners to embrace the as yet untested product. But VLSFO is rapidly emerging as the preferred ship fuel for 2020 and beyond and MGO is fading as a solution. We raised our estimate of VLSFO demand in 2020 to 1.2-1.4 mb/d in August as acceptance of the fuel type is growing and there is scope to see a VLSFO market as large as 2 mb/d across next year, though some hurdles remain.

Even with 1.4 mb/d of VLSFO, we will need a lot less MGO next year, perhaps just 1.0-1.5 mb/d in 2020, which is a lot more manageable that other scenarios. Some in the market are still mistaken about the nature of MGO as well, believing it interchangeable with on-road diesel. This risks drawing false conclusions. MGO has greater permitted density than on-road diesel and some grades do not need to be “clear and bright”, meaning a lot more components can be blended into the MGO pool than the on-road diesel pool.

Europe will remain structurally short of diesel through next year and this means the arbitrage from East of Suez must stay open. Moreover, the Atlantic basin short has grown with the closure of the 0.35 mb/d PES refinery on the US East Coast. This has increased the Atlantic basin diesel short by 0.12 mb/d on average and could require imports of 0.4 mb/d in January and February when heating demand is strongest. This dependence on East of Suez flows means political risk is a major factor for middle distillates markets as tensions in the Gulf heat up.

The key to the diesel market in the coming weeks is going to be the speed of Saudi Arabia’s crude oil recovery and the burden Saudi refineries are going to be asked to shoulder to maintain crude oil exports. With diesel imports into the USEC looking 50 thousand b/d below the 0.22 mb/d level we think is needed in Q4 19 to balance the market, USEC stocks could enter December at the lowest level since 2014. In a world where risk is on the rise, this is not a recipe for a stable market. 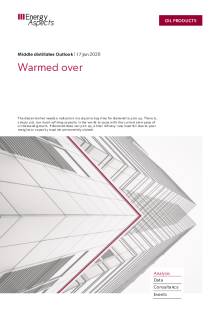 Distillate bulls have come in full contact with Murphy’s law this winter: everything that can go.. 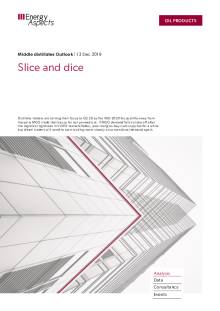 Distillate traders are turning their focus to Q2 20 as the IMO 2020 focus shifts away from the ea.. 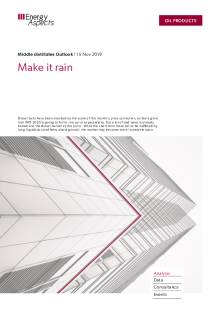 Diesel bulls have been shocked by the scale of this month’s price correction, as fears grow that..

The big switch to IMO 2020 compliant fuels has finally arrived, and VLSFO demand is expected to s..