We see Chinese LNG imports rising to 22.1 bcm in Q1 20, from 20.3 bcm a year earlier, with imports testing maximum regasification capacity. Debottlenecking inland pipeline capacity last year enabled greater use of the country’s mainland import terminals in the south to send gas to the demand centres in the north. The already higher use of southern terminals offers little additional capacity for import growth this winter. The unbundling of gas transmission operations from China’s state suppliers has also discouraged investments in expanding cross-county transmission capacity.

Little LNG regasification capacity has been added this year. We expect aggregate capacity to be 74 Mtpa at the start of January 2020, up from 71.5 Mtpa a year earlier. Imports can rise above aggregate nameplate regasification capacity in China because of the use of trucks to take LNG directly from terminals for inland distribution. We expect this to happen at times in Q1 20, but to no greater extent than last winter.

There is uncertainty about whether two proposed import terminals, together equating to 3 Mtpa of regasification capacity, will be ready by the start of 2020. The plants could add up to 1 bcm to supply in Q1 20, if ready on time. Satellite images of the two terminals, Chaozhou in Guangdong province and Jiangyin in Jiangsu province, suggest that much of the construction work has been completed. But the financial difficulties of Sino Energy, a key sponsor of both projects, has called into question the planned operational start-up of the terminals before January. We expect this capacity to be commissioned in H2 20 but not enable higher imports in Q1 20.

China’s ability to meet winter demand in the last couple of years has depended heavily on debottlenecking inland pipeline capacity to send gas from southern import terminals to the high-demand centres in the north. But much of the progress in unlocking that additional capacity appears to have been achieved last year, offering limited potential import growth this winter.

The utilisation of the nine mainland LNG terminals in the south rose to 94% in October 2018-March 2019, from 76% a year earlier, according to Kpler cargo tracking data. And these terminals were operating above nameplate capacity in November 2018-January 2019. The already higher utilisation leaves little scope for these terminals to take more LNG this winter. It was enabled by greater south-to-north pipeline capacity. China’s CNOOC, for example, expanded links from the Guangzhou terminal to the Guangdong system and connected that to CNPC’s second West-East pipeline (WEP2). This boosted capacity to send gas to the north of the country, with CNOOC saying that this contributes to around 2.4 bcm in additional supply to seven northern provinces.

Further work on grid expansions could unlock some supply from the terminal additions in the south this year. But this work may have been delayed by uncertainty over which pipelines would fall under the control of the country’s planned state-owned transmission system operator. The system operator was previously scheduled to take over pipeline capacity in September. But the Chinese government only chose banks—CLSA, BOC International and China International Capital Corporation—to work on the formation of the company earlier this month. It could take some time before this company is established, and the willingness of Chinese state-owned firms to invest in the meantime is likely to be low.

That said, greater cooperation between China’s suppliers in swapping their use capacity could remove contractual congestion. The Chinese government ordered Sinopec, CNOOC and CNPC to cooperate in capacity sharing last winter. And the expansion of third-party access (TPA) could also unlock greater use of the gas grid. TPA rules, in place since 2013, may be finally taking effect. CNOOC—the operator of 12 of China’s 22 LNG terminals—this month signed a 27-month agreement with a consortium of state-owned Zhenhua and a number of private companies to give them access to nine of its terminals and launched short- and long-term capacity products on the Shanghai Petroleum and Natural Gas Exchange.

We expect that imports will test maximum regasification capacity in Q1 20 given that aggregate demand growth in China, is still outpacing production growth, despite output accelerating much faster than in recent years.

And pipeline imports from Central Asia have dropped y/y in recent months, particularly from Turkmenistan and Uzbekistan, and have only been partly offset by quicker supply from Kazakhstan and Myanmar. This threatens to leave the spare 2.8 bcm of capacity on the West-East pipelines from last winter unfilled. We expect around 1.5 bcm of additional supply y/y in Q1 20 from Gazprom’s Power of Siberia project, but that supply initially only looks set to meet demand in China’s Heilongiang province, with little capacity to move gas further into China.

China’s government allowed the use of coal-fired boilers last year wherever there were potential gas supply constraints. This suggests that making more supply available in previously constrained areas would allow for more coal displacement by gas this year. China’s National Energy Administration (NEA) has urged caution over the pace of boiler conversion, but distributors have continued to add connections, increasing baseline winter demand. ENN added 30,000 industrial links and 2.6 million residential customers in H1 19. CRG added 25,000 industrial connections and 3.3 million residential customers. These are just two of the main distribution companies. 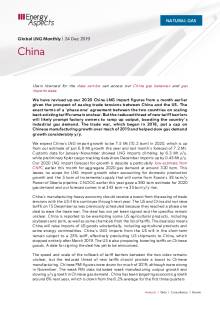