European gas prices slumped this morning (23 September) as it has become increasingly clear that the abnormalities affecting six French nuclear units will provide only a small boost to gas demand this winter. We expect the TTF Win-19 contract to remain soft, with potential for the TTF Q4-19-Q1-20 spread to widen further as the Q1-20 contract retains some risk premium from cold-weather uncertainty and the chance of a halt to Ukrainian gas transit. There is still some limited upside risk to gas prices if the French regulator (ASN) orders the affected nuclear capacity offline this winter—further boosting thermal demand—but Europe’s ample y/y storage surplus should leave the region able to comfortably manage that increase in gas demand.

French nuclear outages: No 2016 bulls, after all

RTE revised its maintenance schedule on Friday (20 September) afternoon to include shutdowns for the six nuclear units totaling 5.8 GW of capacity identified by EDF as having welding abnormalities, but the outages should only boost thermal generation this winter by 4.12 TWh. Only 3.13 GW of the affected capacity is expected to be offline at various times this winter (see Fig 1). If all of the lost nuclear generation is replaced by gas-fired output, it will boost power sector gas demand by just 0.78 bcm in winter 2019-20. This would still leave the European gas market balances looser than last year given that Europe will enter winter with 15 bcm more gas in storage y/y—12 bcm more y/y in European storage sites and another 3 bcm in the Ukrainian customs union.

As we have previously stated, there is still a risk that outages could be heavier than currently stated by EDF, as operation clearance ultimately rests with ASN, and the regulator has yet to announce its findings. But there is now less risk in winter 2019-20 of the safety anomalies at nuclear plants in France providing a significant boost to demand and big upside to European gas prices akin to the outages in 2016 that tightened the market. Even if EDF revises the maintenance schedule and all 5.8 GW of affected capacity is shut down for the duration of winter 2019-20, French nuclear generation would drop by 4.3 TWh for every month of shutdown, adding about 4.9 bcm to winter 2019-20 power sector gas demand, assuming all lost generation is replaced by gas plants (see E-mail alert: Risk of French nuclear outages eases with EDF assurance, but some price risk to remain until ASN gives green light, 18 September 2019). That would lead to a 4.1 bcm increase in winter 2019-20 gas demand on the current maintenance schedule, still leaving the supply-demand balance loose given Europe’s ample y/y storage surplus.

Aside from the risk of an ASN ruling that leads to more nuclear capacity being offline in winter 2019-20 than currently scheduled, there are few factors that could provide support for contracts for delivery extending through Q4 19. Even if we continue to see a y/y downturn in pipeline flows, it is likely that the market will still need to push more gas into the power sector to balance next month, which should result in contracts edging down.

We expect that customers will keep Russian flows much lower y/y next month, owing to a lack of demand and the recent restriction of Gazprom’s use of capacity on Nord Stream (See E-mail alert: Court ruling on Opal dents winter balances by up to 9.0 bcm, upping ante on securing Ukraine transit agreement, 10 September 2019). The hefty y/y losses in Norwegian pipeline supply in the last week also suggest that Equinor is deferring September Troll volumes, and we expect some deferrals to continue in October too. But even if Troll production falls to a five-year low of roughly 88 mcm/d, incremental production from new fields is likely to keep aggregate flows flat y/y, which means that there will be more pressure to push gas into the power sector.

The TTF Oct-19 is now trading at a hefty 2.60 €/MWh below the 15.65 €/MWh at which it settled on 16 September, the day that EDF announced the nuclear abnormalities. The contract is still a step above the fuel switch parity trigger—the price at which a gas-fired plant is in merit over a coal-fired plant with the same efficiency—trading at 11.81 €/MWh as of Monday morning, but we expect it to continue to drop towards fuel switch parity. 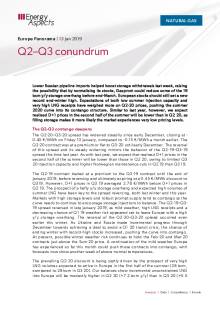 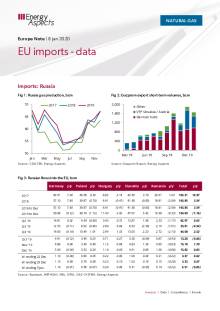