Four new LNG supply projects will come online globally in December 2018 and January. Half are in the US Gulf Coast. Elsewhere, Yamal T3 in Russia was announced as fully operational in December 2018, while Prelude FLNG in Australia began producing LNG late in that month. In total, global supply will rise by 3.3 bcf/d in Q1 19 and the ramp-up at new projects will help boost supply by 3.8 bcf/d y/y over summer 2019. The geographic diversity of these additions could supply locations where import dynamics may be affected by the ongoing US-China trade dispute. China’s 10% import tariff on US LNG is set to rise to 25% on 1 March if an agreement between the two countries is not reached, which would likely make any US-sourced cargoes uneconomic for Chinese importers. Higher export volumes from Australia, including form Prelude, will make it easier for China to navigate the trade dispute with respect to LNG. The mild Q4 18 in Asia, which has curtailed spot market purchases by NE Asian buyers, will also send more US gas to Europe. This, combined with a narrowing of the JKM-TTF spread to around 1.0 $/mmbtu for Feb-19 and Mar-19, will see Europe take 1.1 bcf/d more LNG y/y in Q1 19 and 1.5 bcf/d more y/y over summer.

Global LNG supply is outstripping demand at the start of 2019. The US has been the largest contributor to this new supply wave with Cheniere’s two 0.7 bcf/d (4.5 Mtpa) facilities, Corpus Christi T1 and Sabine Pass T5. Corpus Christi continued to take over 0.6 bcf/d in feedgas in early January as it moves towards commercial service. Feedgas intake at Sabine Pass topped 4.0 bcf/d between 27-30 December 2018, well above its four-train run rate of 3.0 bcf/d, indicating that full start-up of the facility’s fifth train is likely imminent.

The US is not the only country boosting global LNG export capacity, however. Novatek announced in mid-December 2018 that all three of its Yamal trains in Russia are now fully operational. This likely means that the 0.85 bcf/d (5.5 Mtpa) Yamal T3 will begin exporting cargoes early in Q1 19. In the Pacific, Australia’s 0.55 bcf/d (3.6 Mtpa) Prelude FLNG began producing first LNG in late December 2018 and likewise has first exports slated for early in Q1 19. We forecast a slow start for all of these trains, with global supply growing by 3.3 bcf/d y/y in Q1 19 before ramping up by 3.8 bcf/d y/y during summer 2018.

The geographic diversity of early 2019’s new supply will be beneficial for global markets if the US and China are unable to reach an agreement concerning their ongoing trade dispute. China currently has a 10% tariff in place on US LNG imports, made as a reciprocal measure for President Trump’s decision to put 10% tariffs on some $200 billion of Chinese goods. That 10% LNG tariff could rise to 25% on 1 March if an agreement on the trade dispute is not reached by then and US tariffs increase. The current levy is forcing geo-swaps on most, but not all, US-sourced cargoes bound for China. Should current talks fail to de-escalate the situation and the LNG tariff rises to 25%, we would not expect any US cargoes to land in China. That level would also cause headaches for PetroChina’s 0.18 bcf/d (1.2 Mtpa) long-term agreement for offtake from Corpus Christi, which is scheduled to begin when Train 1 enters commercial service and would likely require swapping out with cargoes from elsewhere.

China was already leaning on Australian gas imports before Prelude began producing LNG and will likely continue to do so should the country’s inventories need replenishing. Chinese imports from Australia soared by 2.0 bcf/d y/y to 4.2 bcf/d in November 2018, the highest monthly total on record. The increased volumes, including those from Prelude, can serve as a Pacific basin supply bulwark against tariffs on US gas for China. Indonesia and Malaysia also exported more LNG to China in November 2018 (+0.3 bcf/d y/y and +0.2 bcf/d y/y, respectively), further diversifying the origin of LNG heading to China.

The trade dispute and rising global supply are two of the factors that will see more US gas find a home in Europe in 2019. The mild start to the Asian winter is also pushing US cargoes to Europe, as the lack of cold has kept Asian inventories high. Major importers, particularly China, were active buyers throughout the summer months and likely entered winter 2018/19 with close to full inventories. This has cut the need for spot cargoes this winter, a buying trend compounded by mild temperatures in November 2018 and December 2018 which have not forced large stockdraws. Current 14-day weather forecasts call for historically normal to higher-than-normal temperatures in Northeast Asia through mid-January. As contracts for February delivery would need to be finalised in the coming weeks, there is unlikely to be a surge in Asian spot purchases for February either.

The JKM-TTF spread stands at just $1.2/mmbtu for the Feb-19 contract and less than 1.0 $/mmbtu for Mar-19, due to softer Asian takes, which will push more gas into Europe early in 2019. We forecast that Europe will see 1.1 bcf/d more in LNG imports y/y in Q1 19. In Q2 19 and Q3 19, Europe will likely be able to accept all the gas that the US can send its way, to the tune of a 1.5 bcf/d y/y jump in imports, even though the continent is also set to have a sizeable y/y storage surplus entering the injection season months. Asian demand will add a relatively modest 1.1 bcf/d y/y, led by China and South Asia. This demand growth is likely to boost the next wave of US liquefaction capacity set to come online, with Cameron LNG T1, Corpus Christi T2 and Freeport LNG T1 still tracking for start-ups in summer 2019. 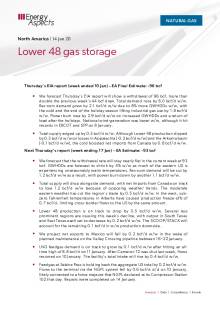